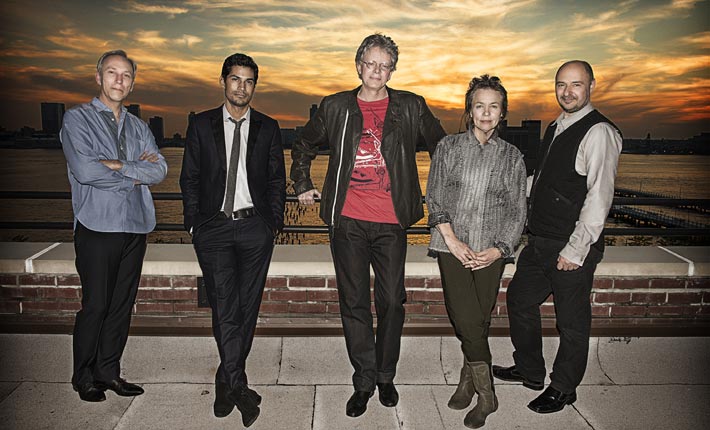 No video online for this one. It really wasn’t that kind of show. So here’s a picture instead.

Because Laurie Anderson and the Kronos Quartet are both the kinds of acts that you should have seen. And I hadn’t seen either of them. So this was a good opportunity to see them both at the same time.

I confess that I didn’t really know what to expect. All I knew about Laurie Anderson was “O Superman” and that she is married to Lou Reed. All I knew about the Kronos Quartet was that they once recorded an album with Elvis Costello (and that’s not even true – I was thinking about The Brodsky Quartet!)

As I said above, I didn’t really know what to expect. They were performing a piece called Landfall. It has something to do with Hurricane Sandy, but there are also other completely unconnected stories involved.

The Kronos Quartet do their string quartet thing. And they do it, no doubt, very well. Laurie Anderson plays violin and keyboards and talks. And there’s stuff projected onto a screen at the back of the stage. A lot of the time it’s words that make sense. Some of the time it’s words where some of the letters have been replaced with pictograms. Once, briefly, it’s text from a completely different alphabet. Oh, and for a while it’s lists of extinct species.

And there’s a lot of smoke. I don’t think I’ve ever seen so much smoke in the Barbican Hall. Even before the show starts the front few rows are covered in smoke.

At its heart, this is a classical recital with a poetry reading on top. And, much as I keep trying to enjoy, I really don’t get much out of classical music. Most of the poetry was enjoyable. Some of it was funny. But there were large stretches of music that really didn’t do much for me.

I was clearly in the minority in the audience though. When the performance finished after about an hour and quarter, the applause was rapturous. About half of the audience gave them a standing ovation. They came back on for two curtain calls.

I didn’t hate it. But it really wasn’t my kind of thing.

Nothing yet. I expect something will appear in the Sunday papers.