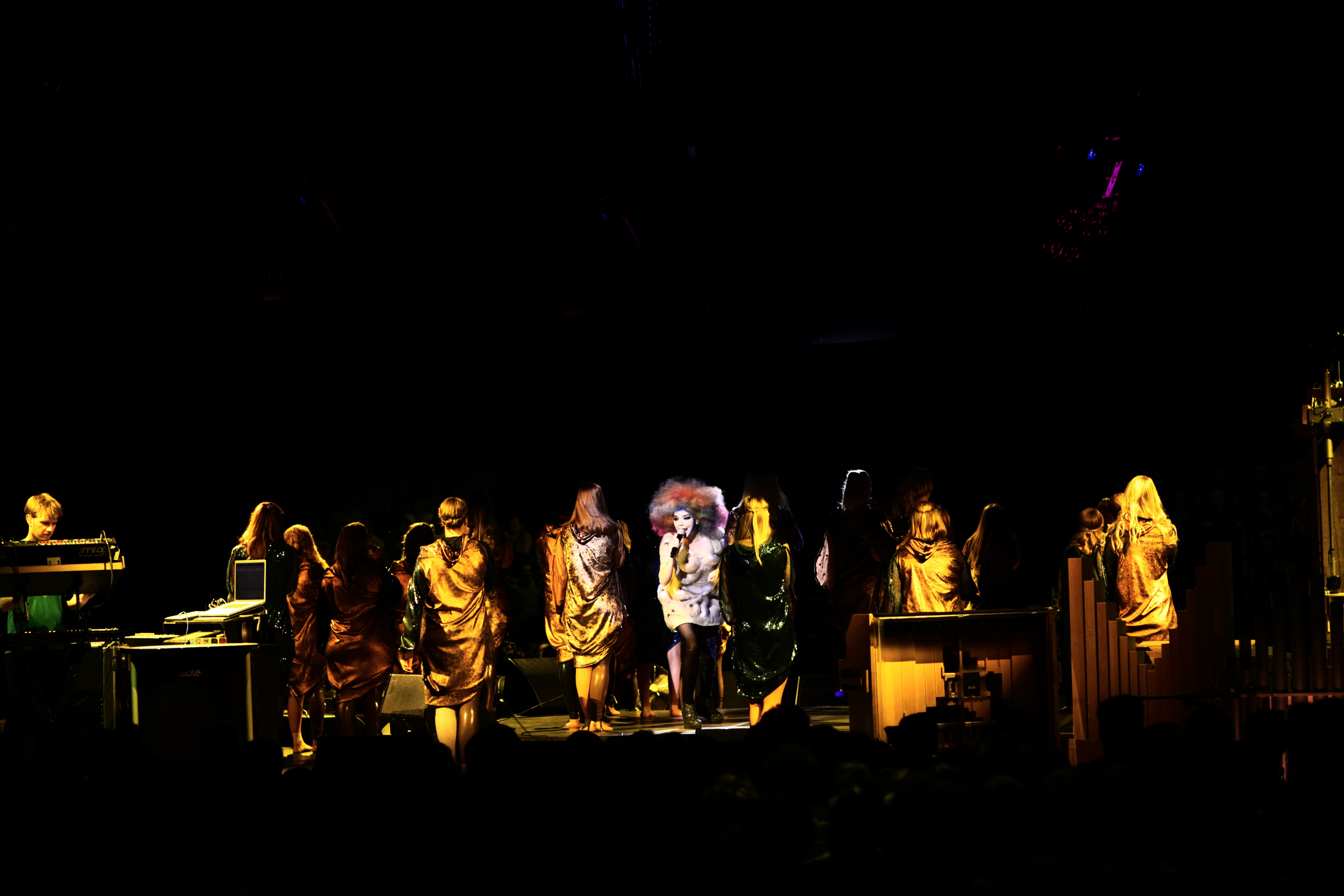 They were pretty clear that they didn’t want anyone taking photos or video at this show. It didn’t work, of course, but there’s not much good footage on YouTube, so here’s one of the official photos from bjork.com, taken by Saga Sig.

I’m not a huge Björk fan, but I’ve always quite liked her. The only other time I saw her was at Glastonbury in about 1994. So when I read of her plans for the Biophilia tour, I decided that now was the time to see her again.

Nothing. Well, unless you count standing around for about an hour listening to obscure electronic music and watching abstract videos.

The show is introduced with a recorded narration from David Attenborough. There’s more from him before pretty much all of the songs from Biophilia. And there’s quite a lot from that album. I’m used to the current album taking up less than a third of a live show, but here it’s over half. I know it’s a concept show, but I think that’s rather a lot.

Because, to be honest, Biophilia isn’t really that good an album. Oh, the songs some to life here (“Crystalline” and “Mutual Core” are both particularly good) but they don’t stand up that well against older songs like “A Hidden Place”, “Isobel” or “One Day”. And the concentration on the new album means there’s very little room for Björk’s amazing back catalogue. She was on great form and the musicians and choir were both really impressive, I would loved to have hear them do “Human Behaviour”, “Pagan Poetry” or “Triumph of the Heart”.

I say “musicians” rather than “band” because there are only two of them. One plays percussion of various kinds and the other is on keyboards and computers. The lack of musicians leaves lots of space on the stage for the choir. I wasn’t able to count them, but I there were about twenty of them. Their singing was, as you’d expect, sublime, but their movements around the stage also made up a large proportion of the stage show.

The show was presented in the round. That can sometimes be a bit disappointing as the artist is likely to spend three-quarters of the time not facing you. But I got lucky and found myself standing quite close to the stage on the side that Björk seemed to consider the front. She spent about half of the time facing us. And even when she wasn’t, there was always plenty to watch – the choir dancing, videos that had been made to match the songs and a huge great Tesla Coil that was lowered from the ceiling and created fork lightning in the centre of the stage during a couple of the songs.

And, for the encore, there was the “sharpsichord” – a very strange acoustic device in the corner of the hall that was used to accompany “Sacrifice”. That was followed by “One Day” and a gloriously raucous version of “Declare Independence”.

Unfortunately there was an elephant in the room – in the shape of the video crew who were filming the show. I’ve been at shows that have been filmed before. Usually their brief is to film whatever happens and not get in anyone’s way. But at this show they were determined to capture the best possible performance. And that meant that on three occasions whole songs were repeated because the first performance didn’t quite come up to scratch. I’m not sure that I like that idea. I’ve paid a lot for my ticket. I want to see the excitement of a live show. I don’t really want to be seen as an unpaid extra in someone’s film. If a performance isn’t quite perfect, then that’s part of the live experience. I don’t really mind too much if you patch it up a bit in post-production, but don’t ruin the flow of the night.

Björk is, of course, completely bonkers. But in a rather lovely way. It’s just a shame that concentrated rather too much on a below-par album and put the DVD-buying public above the audience on the night.

The setlist is on Setlist.fm.

One Reply to “Björk – Alexandra Palace”