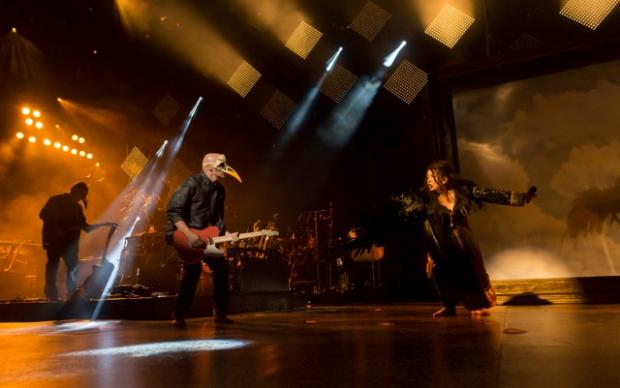 (The clampdown on filming and photography at these shows has been well publicised, so you won’t be surprised that I’ve used one of the official photos)

Silly question really. A better question is “why didn’t you see her in 1979?” I was going to gigs then. And I liked Kate Bush. So why wasn’t I there? I’ve been considering this for some time and I think there were a couple of reasons. Firstly it was the tour for the Lionheart album and I don’t think there are many people who will stand up for Lionheart as one of Kate’s best albums. And secondly (and I think this is most important) we didn’t know at the time that she wouldn’t tour again for thirty-five years. We all pretty much assumed that she would tour again for the next album.

But none of that really matters. It’s Kate Bush. Playing live for the first time since 1979. So of course I was going to be there (even if – as they were – tickets were about three times what you’d expect to pay at the Apollo!)

I don’t think I’ve ever seen a series of concerts analysed so deeply in the press. So it’s almost impossible to believe that anyone reading this doesn’t already know how the show worked. It seems almost pointless adding my thoughts to the sea of works that have already been written about these shows. But here goes anyway…

The show opens with “Lily” from The Red Shoes. I don’t think it’s a particularly well-known track and, therefore, a slightly bizarre choice for an opener – but it’s a personal favourite of mine, so I’m pleased. Immediately I’m also struck by the quality of the production. Not only are the musicians great, but the sound quality is better than I ever remember experiencing at the Apollo. Oh, and Kate’s voice is still fabulous.

There’s about half an hour of this first stage of the show. Kate and the band play six songs including huge hits like “Hounds of Love” and “Running Up That Hill” and less-known songs like “Joanni”. It’s a fantastic performance and I thoroughly enjoy it.

Then there’s a brief break and some shuffling about on stage and we’re launched into the first of the show’s big set pieces – a performance of “The Ninth Wave”, a piece that originally took up all of side two of Hounds of Love (for those of you who remember when albums had sides). It’s not a section of Kate’s work that I know particularly well but this staged version works really well. The theatrical effects blend with the music to create a compelling story.

After a twenty minute break, we’re back for the other bit piece of the evening – a performance of “A Sky of Honey” which is the second CD of Aerial. This is not an album I’ve listened to much at all, so it’s all new to me. The theatricals are toned down in this section. There’s a lot pastoral imagery projected on the back screen and a few characters moving around the stage, but it’s largely the music that takes centre-stage. During this section, I’m reminded why I haven’t listened to Aerial very much. It might be blasphemous, but I think it’s all a little dull. I’m obviously in the minority here as the applause is thunderous.

There’s just time for a quick encore comprising “Among Angels” (the only song from 50 Words for Snow that we get all night) and “Cloudbusting” which has everyone on their feet agreeing that something good is gonna happen.

The setlist is on set.list.fm.

Oh so many. I’m sure you’ve already read them all.