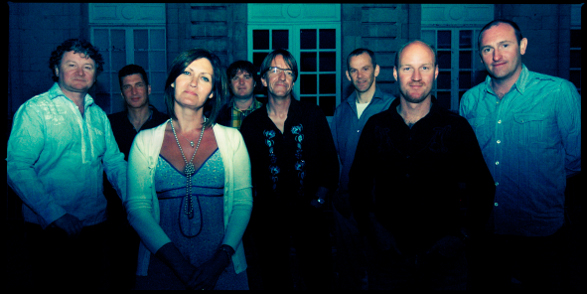 (All of the South Bank venues have started getting very strict about people not videoing their shows. I can’t find anything from the show on YouTube, so here’s a publicity photo.)

Fifteen or twenty years ago, I listened to a lot of Scottish and Irish folk music. And Capercaillie were one of the biggest names on the Scottish folk scene at the time. At some point though, I just stopped listening to them. I haven’t seen them play since I was a regular at the Cambridge Folk Festival – and it’s over fifteen years since I was there. So when this gig was announced I thought it would be fun to catch up with them again.

No support at this show. But Capercaillie play two sets.

That’s not so say that the band weren’t very good. The musicians are all first rate and Karen Matheson still has one of the finest voices in the business. The things that she can do with her vocal chords are amazing.

But it just does nothing for me. At first I wonder if that’s because all of the lyrics are in Gaelic. But I don’t enjoy it any more when they sing a couple of songs in English. I can’t put my finger on it. I don’t know why a style of music that I used to love so much, now just leaves me cold.

I considered leaving at the interval, but decided to stay for the second half. I didn’t enjoy that any more and finally left before they came back for their encore.

Bizarrely, on the way home, I had a huge urge to listen to Clannad.